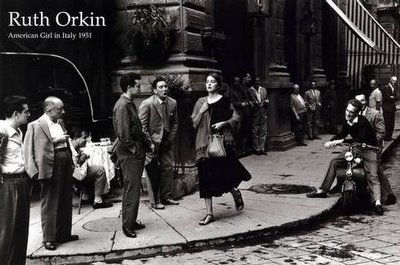 Over at the wonderfully to-the-point "What the hell is wrong with you?" there is a discussion in progress over the equally fine "Holla Back New York City," a website all about street harassment and how heartily sick of it most of us are. I'm just going to repost my comment there, here, because it's something I've been thinking about lately. Specifically, responding to the common whine "Jeeeeez, can't you take a compliment?"

Others observed, correctly, that making rude smacking sounds, saying "Yo, bitch! Suck on this!," grabbing a handful of body parts that do not belong to oneself, following a woman (or a man for that matter; it does happen) home, and similar are not behaviors that any sane person would tolerate, let alone feel "complimented" by, if she didn't feel intimidated--which is, of course, the whole point in these instances, to intimidate.

In the rare instance when the intention is probably not to make oneself feel more powerful at the expense of some stranger, but simply to, indeed, offer a compliment, well, okay:

Yes, it does happen. But. Whether it's a compliment or not is to be entirely decided by the person on the receiving end. If you're respectful and/or charming about it, you might get a polite or a warm smile; you might even get a number. At least as likely, though, you're going to get a frosty or hostile response. Even if your manner was friendly and your intentions were good, oh lord, you're just a soul who's been misunderstood.

Rejection. Never fun. And, you deal with it. Especially when you've made your move on the street. In this culture, you don't just go up and say personal things to strangers. You just don't. And I heartily recommend that anyone who's still going "but, but why? That seems so wrong. I just want luurrrrve" go check out the hollaback website right now.

Example of something I took as an actual compliment, the other day:

Man passing, holding grocery bags, clearly had places to go and things to do. Made a remark about the weather, as one does on this street, which is at least somewhat neighborly. I rejoined. He adds, as we turn to go on our merry ways, "You have beautiful hair."

Personally, I'm not particularly in the market for compliments from men, especially random strangers, but no harm, no foul.

Note that not only was the response not "Oh God that makes me so hot please come ravish me right now," but it did not seem to me that the complimenter had that expectation, or indeed any expectation. That right there made the difference.

And still, it could well have been that I might have responded with silence or a stiff jerk of the head or even something ruder, and you know what? It would've been well within my rights to do so. It's New York. He still could've followed up with something creepy/threatening. Odds are that that would be the case, when such a remark is made. It was a judgment call based on subtle cues, the circumstances, my own mood. Mine to make.

It would be swell if we all lived in an atmosphere where casual compliments could be given and taken at face value, and where flirtation didn't have to be anything more serious or ominous than just that. If you want that atmosphere to be a reality, then I suggest you go out of your way to make it happen by setting an example. Learn about this shit. Learn some empathy. Learn some social skills. And if you do get rejected anyway: smile bravely and suck it up. Move on. It's life. No one owes you anything. Not even a pretty woman passing you on the street.
Posted by belledame222 at 1:33 PM

Very nicely written - am in total agreement. And thanks for the link!