O for a muse of Gouda 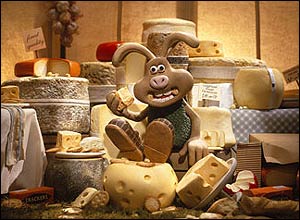 This post from midwesterntransport reminded me of James McIntyre. My favorite Awful Poet, I think. I know fastlad will vouch for Amanda McKittrick Ros, and it is true that it is hard to compete with the sheer genius of, for instance, "On Visiting Westminster Abbey:"

Holy Moses! Have a look!
Flesh decayed in every nook!
Some rare bits of brain lie here,
Mortal loads of beef and beer,
Some of whom are turned to dust,
Every one bids lost to lust;
Royal flesh so tinged with 'blue'
Undergoes the same as you.

All the same. You have to admire a poet who picks a theme, a leitmotif, if you will, and sticks with it. For many poets it is love; for others, it is death; for Amanda McKittrick Ros, it was, among other things, her intense hatred for her critics. For James McIntyre, it was cheese.

For example, this classic piece, in which the author transcends mere prosaic curds and whey to find a near-mystical note. "Prophecy of a Ten Ton Cheese:"


In presenting this delicate, dainty morsel to the imagination of the people, I believed that it could be realized. I viewed the machine that turned and raised the mamoth cheese, and saw the powerful machine invented by James Ireland at the West Oxford companies factory to turn the great and fine cheese he was making there. This company with but little assistance could produce a ten ton cheese.


Who hath prophetic vision sees
In future times a ten ton cheese,
Several companies could join
To furnish curd for great combine
More honor far than making gun
Of mighty size and many a ton.

Machine it could be made with ease
That could turn this monster cheese,
The greatest honour to our land
Would be this orb of finest brand,
Three hundred curd they would need squeeze
For to make this mammoth cheese.

So British lands could confederate
Three hundred provinces in one state,
When all in harmony agrees
To be pressed in one like this cheese,
Then one skillful hand could acquire
Power to move British empire.

But various curds must be combined
And each factory their curd must grind,
To blend harmonious in one
This great cheese of mighty span,
And uniform in quality
A glorious reality.

But it will need a powerful press
This cheese queen to caress,
And a large extent of charms
Hoop will encircle in its arms,
And we do not now despair,
But we shall see it at world's fair.

And view the people all agog, so
Excited o'er it in Chicago,
To seek fresh conquests queen of cheese
She may sail across the seas,
Where she would meet reception grand
From the warm hearts in old England.

Yes, indeed, Blessed Are The Cheesemakers. Or indeed all makers of dairy products:

The milk it floats in great spring flood
Though it is not so rich and good,
Let us be thankful for this stream
Of milk and also curds and cream.

...And so we see that there is room for infinite subtlety and variation even within the narrow strictures of a particular form or subject. From the single inspiration of fermented and pasteurized cow-juice, the poet produces a plethora of small masterpieces. "Father Ranney, the Cheese Pioneer." "Oxford Cheese Ode." "Fertile Lands and Mammoth Cheese." And others still. In his own way, Mssr. McIntyre proved to be as unexpectedly fertile and bounteous as the frozen Canadian tundra, flowing with milk and...milk, which was his muse. Truly, we shall not see his like again soon.** 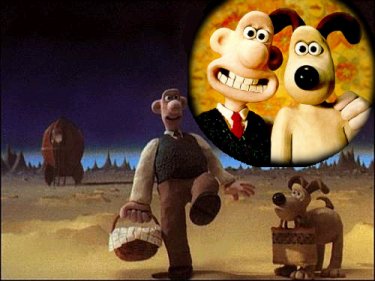 So I say to you, midwesterntransport and all whose significant others have ever uttered the moving lines "I love you more than cheddar," consider: you're in fine company. Truly, is cheese not, in fact, a worthy metaphor for love? Might not the dairy-besotted poet in fact see profound symbolism in the delicate, delicious substance which only grows finer as it ages? And besides, consider: it could have been worse.

It could have been Limburger.

**While it is true that I am not familiar enough with contemporary poetry to name a worthy successor to Ros or McIntyre, if we can expand the criteria to include prose fiction, I for one put in a vote for one Pastor G. Edwin Lint, a number of whose works, including two full-length novels, can be read in full online.

From "Gone: A Novel About the Rapture.

Ronni turned pale and rose from her chair to stare out the window at the frozen, snow-covered Susquehanna River. "You're right about the cat, Dan. What you saw and heard was not ordinary and you folks have a right to know the truth about that, too. There's no telling what's ahead for all of us and the more information we all have, the better off we'll be. Remember that movie, the Exorcist?"

The Marlows had read the book and seen the movie.

"Well, my cat was demon-possessed tonight when he was shot."

Dan looked surprised but Karen laughed harshly. "All right, Ronni! You've reached my breaking point now. My twins are gone, your husband and two children are missing. Mark tells us the entire population of his institution is wiped out. And maybe, just maybe I can accept this business of what you call a rapture with a God of judgment and Jesus Christ with his marriage feast or whatever. But no demon possession!. No way demon possession. That's nothing but the invention of primitive and superstitious minds in an incorrect diagnosis of a seizure disorder or insanity or both. But definitely not demon possession. The only thing evil in that cat was a can of spoiled cat food!"

Dan faced the dresser from his position in the doorway and he had a perfect shot at the back of a down-covered baby-shaped head. His finger tensed on the trigger and then he paused. It isn't easy to shoot the image of a 6-month-old baby, even when the target is most likely not a baby at all but some sort of demonic entity. The action of the creature on the left in scooping up a globule of congealed bilge and flinging it at Karen's face erased his hesitation, however...
Posted by belledame222 at 5:52 PM

Bad poetry, cheese, and Wallace & Gromit--my night is getting better and better!

which I haven't written...

Read Gabriel Guddings' "A Defense of Poetry," in which every other poem makes some reference to his buttocks or his anus--or the anus of some feather-bearing creature, such as a peacock.

You will find in the collection of poems such jewels as "for I have clapped your dillywong in a sizeable door" and, oh, a bunch of others that I can't rightly remember on account of I gave his book to someone who I thought would benefit from reading it.

Anyway, seriously, you should read it. It's better than cheddar!

As far as poems that are intentionally, um, quirky go, I'm especially fond of this one.

seriously, that was brilliant.
i had no idea that food products could qualify as muses, but i'm happy to hear that they can. perhaps it's time for "Ode to Cocoa" or "Two Paths Diverged in a Yellow Curry..."

Some singers sing of ladies' eyes,
And some of ladies lips,
Refined ones praise their ladylike ways,
And course ones hymn their hips.
The Oxford Book of English Verse
Is lush with lyrics tender;
A poet, I guess, is more or less
Preoccupied with gender.
Yet I, though custom call me crude,
Prefer to sing in praise of food.
Food,
Yes, food,
Just any old kind of food.
Pheasant is pleasant, of course,
And terrapin, too, is tasty,
Lobster I freely endorse,
In pate or patty or pasty.
But there's nothing the matter with butter,
And nothing the matter with jam,
And the warmest greetings I utter
To the ham and the yam and the clam.
For they're food,
All food,
And I think very fondly of food.
Through I'm broody at times
When bothered by rhymes,
I brood
On food.
Some painters paint the sapphire sea,
And some the gathering storm.
Others portray young lambs at play,
But most, the female form.
“Twas trite in that primeval dawn
When painting got its start,
That a lady with her garments on
Is Life, but is she Art?
By undraped nymphs
I am not wooed;
I'd rather painters painted food.
Food,
Just food,
Just any old kind of food.
Go purloin a sirloin, my pet,
If you'd win a devotion incredible;
And asparagus tips vinaigrette,
Or anything else that is edible.
Bring salad or sausage or scrapple,
A berry or even a beet.
Bring an oyster, an egg, or an apple,
As long as it's something to eat.
If it's food,
It's food;
Never mind what kind of food.
When I ponder my mind
I consistently find
It is glued
On food.

I am horrified, horrified that you have left out William McGonagall.

good evening bros. I'm honestly into shoes and I was looking allowing for regarding that meticulous make. The prices seeking the shoes are all over 310 pounds on every site. But completely I base this locate selling them as a remedy for half price. I absolutely like those [url=http://www.shoesempire.com]prada sneakers[/url]. I will absolutely purchase these. what can you tell me about these?

good afternoon dudes. I'm actually into shoes and I was looking allowing for regarding that singular brand. The prices as regards the shoes are all over 320 pounds everwhere. But for all I base this locate selling them someone is concerned half price. I really want those [url=http://www.shoesempire.com]prada sneakers[/url]. I will probably purchase them. what can you tell me about these?

good afternoon ppl. I'm honestly into shoes and I had been digging as far as something that exact brand. The prices for the boots were around 240 bucks everwhere. But definitively I found this area selling them for half price. I exceptionally want these [url=http://www.shoesempire.com]gucci sneakers[/url]. I will probably purchase those. what do you think?

hello bros. I'm actually into shoes and I was looking for that meticulous model. The prices seeking the velcros are all over 230 bucks everwhere. But definitively I set this site selling them as a remedy for half price. I really want those [url=http://www.shoesempire.com]gucci sneakers[/url]. I will probably buy those. what do you think?

good morning everyone. I'm honestly into shoes and I have been searching for the sake of that singular brand. The prices seeking the sneakers were around 180 pounds on every page. But finally I base this area selling them for the benefit of half price. I really want those [url=http://www.shoesempire.com]gucci sneakers[/url]. I will definetly purchase these. what do you think?

I really liked your article. cardiovascular Read a useful article about tramadol tramadol