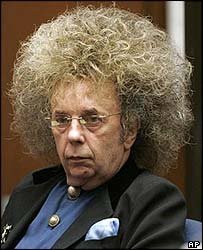 It'd be bad enough if he actually had the face to go with a zany-type 'fro like that. That dour, pinchy little puss underneath just pushes the whole thing into utterly surreal territory. He looks like someone *forced* him to wear that giant tumbleweed of a 'do; like, he'd rather have a nice, sensible combover like all the guys, but nooo; he lost a bet with an evil fairy and now he has to carry that around on his head until the Firebird is reborn from it or something.
Posted by belledame222 at 12:23 AM